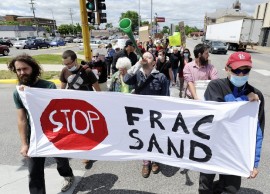 The frac sand songs were written and recorded as part of a “sand song contest” for the documentary film “The Price of Sand” by Jim Tittle. The filmmaker’s stated goal is to “find the real price of frac sand.  Not just in dollars, but in friendships, communities and the future of our region.” More on film and frac sand mining in SE MN and SW WI here: http://thepriceofsand.com.

Hyphon
“Maven”
A Shapely Sign of Things to Come
Independent
2012