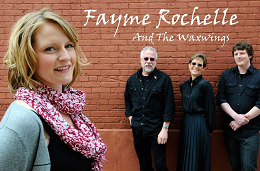 While the band Fayme Rochelle & The Waxwings have been together in some form or another for the past 5 years, Fayme Rochelle herself has been making music and writing songs for the past 10. Noting her background in English education, Second Supper Editor Adam Bissen wrote in late 2009 that Rochelle “has developed an innate ear for traditional melodies” and melds them with the “evocative lyrics of an English teacher.”

In that same article Rochelle went on to tell Bissen about her early musical influences and inspiration, stating “I just starting falling in love with Lucinda Williams and Gillian Welch. When I first starting listening to Gillian Welch, it was like ‘OK, that’s what I want to do.’ And Neko Case. I have like the biggest crushes on all of them.” Nearly five years, dozens of shows, and several albums later, I have no doubt that there are now up and coming Coulee Region singers and songwriters with musical crushes on Rochelle’s tasteful arrangements and amazing voice.