While the band Fayme Rochelle & The Waxwings have been together in some form or another for the past 5 years, Fayme Rochelle herself has been making music and writing songs for the past 10. Noting her background in English education, Second Supper Editor Adam Bissen wrote in late 2009 that Rochelle “has developed an innate ear for traditional melodies” and melds them with the “evocative lyrics of an English teacher.”

In that same article Rochelle went on to tell Bissen about her early musical influences and inspiration, stating “I just starting falling in love with Lucinda Williams and Gillian Welch. When I first starting listening to Gillian Welch, it was like ‘OK, that’s what I want to do.’ And Neko Case. I have like the biggest crushes on all of them.” Nearly five years, dozens of shows, and several albums later, I have no doubt that there are now up and coming Coulee Region singers and songwriters with musical crushes on Rochelle’s tasteful arrangements and amazing voice.

END_OF_DOCUMENT_TOKEN_TO_BE_REPLACED

The new self-titled EP from Jake Ilika & The Heavy Set is a sophisticated and impressive debut. It boasts both high production value and well crafted songs, and for good reason.  The songs and their arrangements benefited from the luxury of developing organically at Jake’s weekly residency at the friendly Ed’s (no name) Bar in Winona. The band also sought out top-notch recording environments in Minneapolis, with producers Dylan Nau (Apolla Cobra, Nicholas David) and country singer-songwriter Erik Koskinen also contributing musically.

This polish pays off in a big way right from the get-go on the opener, Hate Coming Here. Jim Trouten’s lush melodies on the lap steel guitar, along with spacious back-up vocals and pensive lyrics, really help this song land a quick gut punch of emotional weight that both sound and feel similar to the heaviness, heartbreak, and desolation found in Beck’s 2002 album Sea Change or Mazzy Star’s 1993 hit Fade into You. Musically, this is alt-country at its finest.

Thief of a Lover, along with the other song featured in this episode, Minnesota Homegrown, were the two tracks recorded with Koskinen. Both songs showcase Ilika’s warm delivery and vocal dexterity in a big way. Imagine a cocktail party where the guest-list includes the sensitive world-weariness of Neil Young’s falsetto, the laid back softness of Jack Johnson’s baritone, the fullness and pride of Johnny Cash’s lower range, and a modest dose of John Mayer’s raspiness. Add in Koskinen’s country-fried plucking underneath Ilika’s versatile crooning on the chorus of Minnesota Homegrown, and it’s obvious that something special has been captured here.

At 6 minutes in length, the song I played in episode #6, Beggin’ for a Taste, still looms large for me and is arguably the EP’s most powerful accomplishment. Another Neil Young comparison is warranted here, this time for the relaxed intro and solos, in addition to the bittersweet minor-key cadences found in the verses. The song ends on an especially robust note with Trouten and bassist Jamie Groth joining Ilika for a build up of repeated group vocals that climaxes at 5 minutes and 30 seconds into the song with a soulful vibrato on Ilika’s lead vocal part.

It’s been a real pleasure to get to know, and really listen to, Jake Ilika and the Heavy Set’s music since their formation in January of 2013. Their debut EP is stellar snapshot of not only their talents and experience, but also some serious potential. I’m looking forward to enjoying a full length release sometime in the near future!

END_OF_DOCUMENT_TOKEN_TO_BE_REPLACED 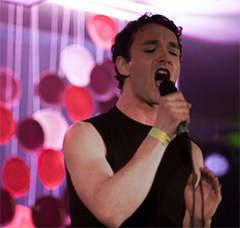 From start to finish, Postcarious feels like an album Breakaway created with both feet firmly planted in an electronic sound. With only minimal and atmospheric use of guitar, Breakaway puts his trademark operatic vocal experimentation, impressive falsetto, and infectious intensity to use over a digital landscape rife with detail and sonic stimulation.

Layered vocals and aggressive beats are the source of a few of the album’s most climatic moment as well. Track 2, The Crashers and The Smashers, ends with a wavy sea of airy crooning over a stripped down, yet fervent, early-Nine Inch Nails style beat. The track featured in this episode, You Can Understand, builds into a dense euphoric wall of echoed vocal phrases over a heavy dose of dance inducing modular synth. In summary, Postcarious is an outstanding document of Breakaway’s vast vocal talents and bold new direction. I hope to see him guesting on other artist’s records in the future too!

END_OF_DOCUMENT_TOKEN_TO_BE_REPLACED 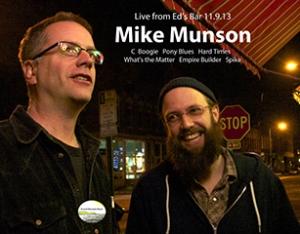 MWMF 2014 was an absolute blast! Each of the acts featured here performed at the 5th annual festival in downtown Winona. I was able to see some of both France Camp and Jillian Rae and I’ve described what I caught below. I was also honored to perform at the festival, under my pseudonym Marv Wilt. KQAL Program Director Teri Market was on hand to record an interview and my performance for an episode of the prolific “Live Feed” radio show. She did an excellent job editing and I’m very thankful to be included as one of the 27 acts KQAL recorded during the festival. CLICK HERE to listen to Marv Wilt on The Live Feed.

Coming back down to 3rd Street after catching Anonymous Choir at the Winona Arts Center, I popped into Ed’s (no name) Bar and caught France Camp’s last song. The had the room worked into a frenzy at that point. As the raucous finale came to a close, the shirtless eponymous frontman’s guitar rig blew out, prompting him to demand a few spontaneous solos from the rhythm section before calling it a night. Blown away by the high energy set. the last minute power outage did nothing to dampen the enthusiasm of the others in the room that had caught more than the single song I did.

Jillian Rae was one of the headliners of the fest’s final day, taking the stage around midnight on Saturday. With my stamina low at that point, Rae’s upbeat, polished Americana sound did much to revive my spirits and get me dancing. The sound and production in the large back room of Broken World Records were downright astonishing, allowing both musicians and attendees alike to be fully immersed in the show. This was a welcome change in my opinion and a big hat tip here goes to Ben Assef and crew at Northern Sun Productions who expertly handled sound and production at all 13 MWMF stages.

END_OF_DOCUMENT_TOKEN_TO_BE_REPLACED

What can be said about Koo Koo Kanga Roo that hasn’t already been said? (Well, to my knowledge no one has called them gorillas…at least yet.) This spring they’ll be making their indie label debut with Whoopty Whoop via Asian Man Records / Fun Fun Records. Aside from being welcome news and another much-deserved validation of their creative talents and hard work, it means that come May 13 Koo Koo Kango Roo’s music will be available on vinyl! This is very cool and certainly unique for an act that has traditionally only released their music online on a pay-what-you-want basis (not counting a recent best of-style compilation CD). No matter, their high-energy live show has always been at the forefront and, coinciding with the release of their new album, they’ll be rollin’ in the minivan all across the east coast this spring with the Aquabats. Kudos gentlemen! Can’t wait to bust out my Koo Koo themed Fischer-Price turntable…

END_OF_DOCUMENT_TOKEN_TO_BE_REPLACED

While I try my best to “spread the love around” with this program, Winona singer-songwriter Jaybone Bell released his debut solo album, Tale of the Sun, less than a week after I last featured his band in episode #19. So, due to poor timing on my part, I am once again spotlighting one of the more prolific acts in the Winona area. Tale of the Sun is an intricate and stripped down take on his Americana sound. The extra breathing room showcases the beguiling gravitas of Jaybone and Amber Grace’s dueling co-ed vocals.

END_OF_DOCUMENT_TOKEN_TO_BE_REPLACED

The Shot to Hell song featured in this episode is the first track off their 2011 album Somehow Forever. The group has been on and off for over a decade now and is currently busy wrapping up production on a new album, which will hopefully be out in time for the band’s gig opening up for Austin country act Wanye “The Train” Hancock at the Cavalier Theater in La Crosse on June 13, 2014.

As Jason Crider of the Second Supper wrote, “[The band blends] rock and roll bluntness with country twang and a no-holds-barred punk rock delivery; depicting some very dark subject matter in an indirect and sometimes lighthearted way.”

END_OF_DOCUMENT_TOKEN_TO_BE_REPLACED

All Lights Off Radio
Create a free website or blog at WordPress.com.